So me and 6 other bloggers got the fabulous opportunity to participate in the collaborative  blog tour for Floored. Probably the most hyped book of the year which i reviewed on here the other day if you want to go check that out.

Today i am releasing my chapter i wrote based off the prompt line i chose from the novel: I am the Last stop!

The woman on the reception desk knew that the tall dark haired man standing in front of her was not who he said he was. Emily knew this because although claiming to meet his wife Hannah McEwan, his real wife’s name is Yvonne and also happens to be her best friend. So Straight away Emily knew that something very fishy was going on, and felt she needed to investigate.Here marks the beginning of a mission!

After signing him in and going through the same repetitive / boring spiel of handing over the keys and a brief layout of the hotel the man who’s named Jacob Franklin walks off without a clue in the world who Emily is. She stands paralyzed and shocked from what she thinks is happening right in front of her eyes as 100 thoughts race around her head. She can’t help but stare so it’s a good job Jacob has his back towards the open spaced reception area and is just approaching the bar where Tall chrome and black seats line the slick bar where handsome men and skinny women serve Cracking cocktails, marvellous mocktails and on tap soft drinks 24/7. It’s the life and soul of The boring Sea Side hotel Emily works in.

The hotel sits just on the coast of Blackpool nothing pretty from the outside just a plain cream coloured building with an illuminating blue sign with only half the letters working. The inside isn’t much better, although open plan, its old furniture dates the place instantly as well as the damp smell that fills every room no matter how much rose smelling spray Emily uses. She hates it but it’s the only income her and her girlfriend have to live on.

Megan and Emily have been dating for 4 years now when they met at the local university doing an Occupational Therapist course. However Emily hated it but stayed for the beautiful girl who sat opposite then ,1 year in when Megan was only 27 , she had to leave due to a devastating diagnosis of Stage 4 Breast Cancer. So Emily and her bought a small flat together and she started to work at the local hotel to pay for the bills.

Ahead Jacob approaches a short slim girl who has bleach blonde hair in a dress that’s so tight you’d think it had been painted on with the tallest stiletto heels to accompany it, and is followed by a passionate kiss with Jacobs hand placed perfectly on Hannah’s right but cheek. Emily had now had her worst fears 100% confirmed Jacob was definitely cheating on Yvonne and she is the one who is going to have to deliver the dreaded news. As Jacob and Hannah settle in at the bar talking, grinning and fluttering eyes Emily returns to her desk as more people arrive.3 hours later and it’s the end of Emily’s shift, she’s seen the pair almost speed walking and fondling their way to their room with hands and lips exploring places they shouldn’t in public. But now Emily is to cycle back home and snuggle in bed with Megan who is feeling sick and lightheaded from the Chemo she’s having at the moment, its working though so they just have to keep fighting for 3 more weeks and then this horror of a journey will hopefully be over.Whilst lying in bed that night with Megan passed out head heavy on her chest and arms tightly entangled Emily was thinking about how she’s going to get evidence of the dirty scumbag cheater.

Normally Emily only works 4 days a week but she has never seen them before so she thinks they normally come in on a Thursday, Monday or Sunday so she’s going to ask her manager if she can change her shifts to Wednesday, Thursday, Sunday and Monday in the hope she will see the pair more often. The next morning she does just that and it was super successful as it was approved. Changing these shifts means that Emily would have to help out with the room cleaning too as they are short staffed. That’s ok though as she is prepared to do anything for her longest friend.So when Sunday comes around Emily is nervous and excited with butterfly’s flying around inside her stomach. All day she waited and watched but neither Hannah nor Jacob Walked past. The same on Monday so Emily was starting to loose hope. Then at 5pm on Wednesday Hannah walked straight through the doors and came up to Emily on reception.

“Hello, I have a room booked for 2 in the name Hannah McEwan we stay here 4 times a week but we couldn’t manage this Sunday and Monday”

“Hi, I’m Emily the receptionist so if you need any help at all just come and ask. You’re in room 121 tonight and tomorrow, which is on the second floor on the right. With a lovely balcony overlooking the pier, its not quite ready yet so if you want to go grab a drink or some food and it should be ready in about 40 minutes. ”

Just 15 minutes later Jacob arrives and sees Hannah and just heads straight over. Emily’s trying to earwig as they are sat to her left on the sofa and catches they’re going for dinner. Its Emily’s job to clean the room (what a coincidence) so she swaps with velvet the usual cleaner and heads off to room 121. Cleaning rooms is hard work as sweat drips and she struggles to catch her breath there’s noise growing louder outside.Then the door opens and the suitcases get pushed in . Emily jumps in to the bath and pulls the curtain across. She can’t believe what is happening. Emily can hear giggling and moaning and ‘love you’ ‘take it off’ then a pound on the bed as if falling onto it. So she quietly gets out the bath and the door is ajar anyway so she peeks out with her phone recording. What she sees next is something she will never un see and wishes she wasn’t there.Emily has to carry on because it’s the evidence she needs. So she stays silenced and still watching two naked body’s entwined and moving up and down in positions that don’t look at all comfortable. Hannah panting loudly, laughing tongues digging deep into each other’s mouths. Jacobs biting and sucking on her neck moving down to god knows where because at this point it was too uncomfortable to watch and Emily stopped recording.This was the evidence she needed as well as her print out of the name and when they’ve stayed so she runs out slamming the door behind and carry’s on running down the corridor into the lift as fast as lightning.When arriving back at reception she relays what happened to lulu and is amused to a degree because velvet had thought she was finished cleaning so sent them up to their room.

For the next 2 weeks Emily saw them on all her shifts but due to it being summer its been extra busy so thankfully she didn’t have time to watch them as she has seen enough already. Megan has finished chemo in this time too and is now in remission so they’ve been spending quality time together in the evenings and Emily just hasn’t had a chance to tell Yvonne yet. But this Monday she isn’t working so took the time to organise meeting Yvonne. It has to be done! 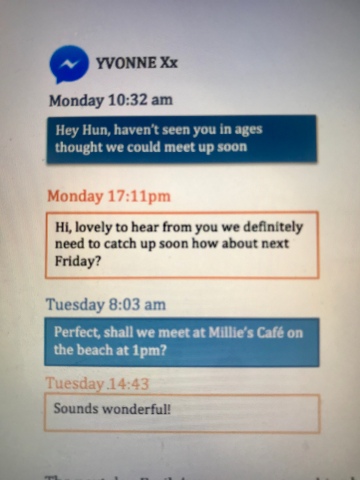 The next day Emily’s manager rings asking her to work Friday as they have a huge conference happening. She agrees as her and Megan want to go away to Gran Canaria in October so the money would help them with their saving.The next few days zoom past as Emily and Megan go sunbaving on the beach and a day trip to some zoo that she’s forgotten the name of already.

Friday morning Emily was out of bed by 6am eating her Weetabix and her old faithful cappuccino to start the day. 1 hour later she’s dressed and kissing Megan goodbye in bed ready to board her bike too work.Its 9am and Emily is stuck in to her current read when her first visitor in about an hour is standing at the desk looking very unimpressed. His tall and skinny for a guy with well-kept brown hair that’s starting to go grey but at the moment almost silvery. His lips though. Wow even Emily as a lesbian felt like kissing them, they are heavenly! Once she’s done daydreaming, the guy Richard-James Braith Says his here for the conference in a smooth southern accent showing his from a wealthy background. Emily directs him to “go to the 3rd floor then turn left and at the end is a door that says conference room, which is where you’ll be spending your day.”

Then one by one they start to flood reception all looking somewhat nervous about their day ahead. Emily just has a list of first names so she checks them in one by one, Marina, Justin and then a brown haired hippy looking girl walks through the doors followed by a lady shouting that she’d forgotten her purse. Then as they got nearer Emily realized it was Yvonne, her best friend, and reality hit that now she would have to tell her about Jacob and Hannah.

The daughter Audrey was here for the conference so she got signed in and headed upstairs. Emily and Yvonne stood chatting for ages and after an hour it was Her lunch break so  both headed to the bar for some food and drink. They caught up about work, life and future plans but then was the opportunity for Emily to tell her.

“I’m really sorry to have to tell you this but..”

“Just spit out Emily it cant be that bad”

“About a month ago he came in to meet his wife but gave the name Hannah and I obviously knew who he was so I watched and they kissed, shared I love you and had sex. They come every week and I have it on record and printed out incase you want to confront him.”

“Nooooo I love him” Yvonne wails as tears stream down her face like a waterfall.

“I know, maybe if you tell him you can work it out together.”

“No way he’s gone how could he do this to me and our beautiful daughter, I’ve got to go sort this mess out right now whilst Audrey’s not home. Thank you for your Help Emily”

“See you next week Yvonne, and Good Luck”

Emily was now alone and her break nearly over so she goes back to her reception desk and swaps with Velvet who was covering.

No one came for a good half an hour until a lovey dovey couple walks through the door hand in hand approaching the desk. Larah and Elvin  were meant to be at the conference so they ran into the elevator ready for the last hour as it finishes at 6pm.

And that was that, Emily headed home to Megan with the weight lifted off her shoulders that everything was going to be ok again.

Thanks for reading my Blog id be so thankful if you follow here and my socials and show me some love. Also go read FLOORED its amazing 🙂

Here are the links to the other chapters from my fellow bloggers who took part.

Heres the link to my previous post for my review and guesses for who wrote who Ya Book Review : Floored + Who wrote Who?